November 11, 1978 and David Bowie played not only his first show in Southern Hemisphere but also his first large scale solo outdoor gig.

The venue was the picturesque Adelaide Oval. 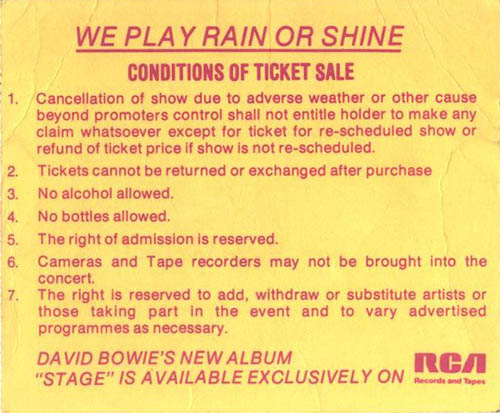 In his diary of the 1978 tour, keyboardist Sean Mayes suggested that the Oval provided a great relief after many concrete stadiums and catacomb dressing rooms on their more hectic US and European tours.

He also reflected on Adelaide as a city, “Adelaide was a strange city to my English eyes. The streets were wide like an American town but the buildings were like a European town.”

Being the first concert on the new part of the tour, there was the question of what might be played. Despite having tour reports of overseas concerts, it was not certain whether Bowie would maintain something similar…

Bowie fan Colin M who was there recalls, “As the light began to fade support band, The Angels, who were playing to a home crowd, entertained, and were warmly welcomed.

“It seemed an age between The Angels finishing and a group of musicians walking quietly on to stage and the opening bars of “Warsawa” sounding.

“At least in youth, there’s a strong impact of seeing someone who has been admired in the flesh for the first time. They seem larger than life, almost magical.

“For me, that Adelaide concert on Saturday November 11 was magical. A short visit to Adelaide airport the next day secured autographs of the some of the band.”

As it turned out, the repertoire in Adelaide remained almost identical to the previous leg of the tour – focusing on material from Low and Heroes, although Speed of Life had now been dropped. The set was effectively divided in two with Bowie announcing:

“We’re just going off for 10 minutes…and when we come back…we won’t be wearing any slippers”.

Mayes also recalled that the crowd was particularly vocal in the second half:

“People were throwing streamers on-stage, also a sparkler, a camera sling… and a blue puppet wearing a DEVO badge.

Towards the end, backing singer Carlos was losing his voice and David forgot some of the words in Station to Station. But we stormed through the encores.”

After the gig, the band went to what was described as “a posh but boring nightclub”.

He recalls meeting Bowie while working at the concert, “I was wiring under the stage. Bowie came down to introduce himself to me and we had a chat. He went out of his way to talk to a lot of people behind the scenes.”

The gig was also the first that Jankovic postered around Adelaide, a career he has done so successfully for the past 38 years it has earnt him his nickname! 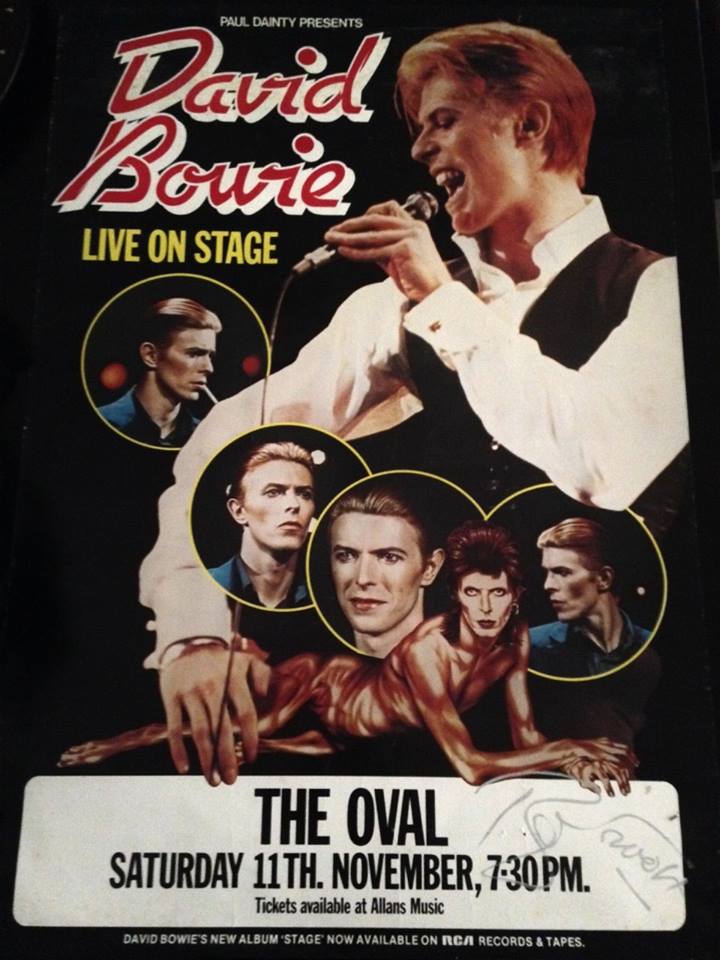 Were you there? Tell us about the gig.