It seems as though there are AFL docos dropping left, right and centre (or should I say forward, mids and back).

WELL, an Adelaide Film Festival Investment Fund film are ready to launch their new film ‘This is Port Adelaide’. Opening in cinemas nationally from April 22, there are also Q&A sessions from April 16 with special guests, director/producer Nicole Miller and past Port Adelaide players. 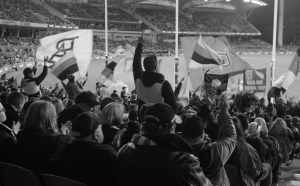 Port Adelaide is one of the world’s oldest and most successful clubs having just celebrated 150 years last year. We’ve seen AFL legends power through the club and port supporters are hardcore fans of the club with 46,820 members. The film captures the passion of fans along with first-hand accounts from players.

Adelaide Film Festival CEO & Creative Director Mat Kesting says: “More than simply a football game, This is Port Adelaide is a universal story about what it means to belong. 2020 was a year that brought unprecedented challenges for us all, but Port always rises to a challenge.”

“The film celebrates the undying connection of the Port Adelaide community, passed down to each new generation, that underpins the resilience that the club needs to adapt and survive.”

port adelaide this is Port Adelaide

Filmed in SA, Mortal Kombat's Trailer Has Been Released