Now is your time to see Natalie Bassingthwaighte up-close in person as she leads the cast in the Chess – The Musical.

This musical is sure to make big moves in a ‘knight’ to remember when they play at Her Majesty’s Theatre in May. 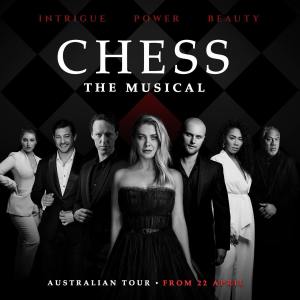 Set during the height of the Cold War, two of the world’s greatest chess players, one American, one Russian, find themselves pawns of their own governments’ sparring. As stakes rise, Florence Vassey, a Hungarian-born refugee finds herself caught in the hurricane between the two grandmasters, in a triangle of both love and power.

With music by ABBA’s Benny Andersson & Björn Ulvaeus, and lyrics and book by Tim Rice (The Lion King, EVITA); Chess – The Musical has a powerful rock-opera soundtrack. Featuring global smash hits ‘I Know Him So Well’ and ‘One Night In Bangkok’, the production will be sure to have you singing along.

“The score is so beautiful, so I think it’s exciting to be able to present that in a concert version with such an amazing cast and orchestra,” Bassingthwaighte said.

Netflix’s highly popular The Queen’s Gambit has caused quite the stir in the chess community, so it seems like ideal timing to be bringing this musical to the Australian stage.

The national musical tour will be arriving in Adelaide from May 27-19, playing at Her Majesty’s Theatre. Book your tickets through BASS.

Get The Hawaiian Shirts Out, Cruises Are Back In South Australia