Adelaide, we are claiming this not so humble brag because we have received the first-ever video call from the Queen to Australia.

Her Majesty spoke to Premier Steven Marshall, Governor Hieu Van Le and sculptor Robert Hannaford who unveiled a new statue of Queen Elizabeth which had recently been installed on the grounds of government house in Adelaide. 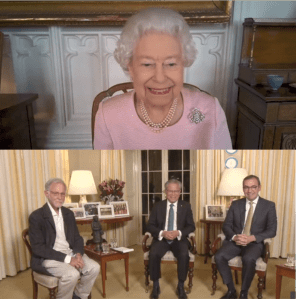 Filmed from Buckingham Palace, the Queen cracked a joke about the statue, saying “I would think possibly it might be quite alarming to suddenly see it out of the window. You’d think, ‘gracious, has she arrived here unexpectedly!’.

The life-size statue stands out the front of government house which has become a popular place to take photos. 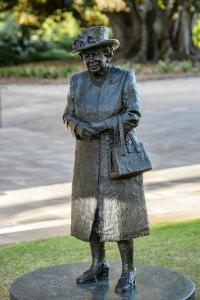 The Queen was presented with a smaller scale of the statue, with the Queen thanking the sculptor and said “I’m glad it’s not quite as big as the original statue!”

The Queen was informed about the COVID-19 update, our vaccine rollout and lifting of restrictions. Premier Marshall told the Queen Adelaide was “almost back to a sense of normality”.

The Queen responded positively towards South Australia’s COVID response saying, “That sounds very good and it must be encouraging that you can all get together too,” she said.

There was no mention of Prince Philip and his time in the hospital.

🎥 HM was briefed on the region’s Covid-19 response and the rollout of the vaccination to frontline workers. pic.twitter.com/skaEePlMHF

The Queen's Stealing The Spotlight From Harry And Meghan

This Men's Shed Is Supporting Its Community Through Sheer Aussie Spirit

Filmed in SA, Mortal Kombat's Trailer Has Been Released