Overnight an apparent Married At First Sight scandal has been brought to light following one couple’s sudden departure from the show.

Poppy and Luke were shown leaving the experiment, with the show seeming to claim that Poppy couldn’t handle being away from her kids and so she made the decision to leave.

It then showed a producer breaking the news to Luke who was shown crying on screen and made it appear as though he was visibly upset by her decision.

In the hours since the episode aired, Poppy has since claimed that what we saw is nothing close to what happened in a lengthy Facebook post that took aim at both Luke and the show producers.

In the post Poppy claimed that Luke was not the person that Australia thinks he is, claiming that he was “fake on camera and a complete dick head behind the scenes”.

She also claimed to be “uncomfortable” around him but said that she felt too scared to do or say anything “because they told me Australia was going to f*cking hate me”. 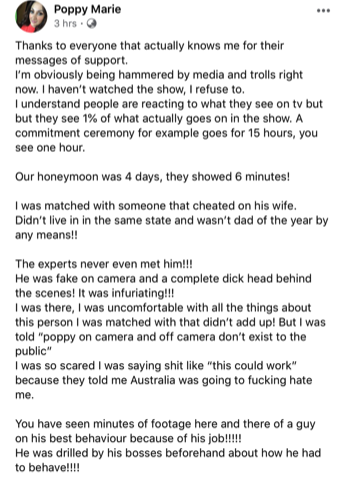 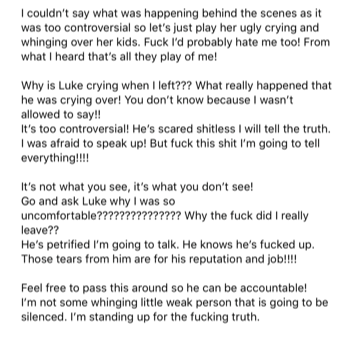 The post has since been deleted and it’s not known what exactly occurred between the pair that has left Poppy so upset.

But someone who would know exactly what happened is the other MAFS contestants and so when Connie, who is on the show married to Jonathan, joined Kyle and Jackie O Show this morning we took the opportunity to ask her about it.

“Poppy, she left, and it seemed like she left because of her two sons but now she’s come out and said, ‘No no’. Something so controversial happened between her and Luke that it was all hidden and not shown on TV and she’s going to tell people what happened,” Jackie explained this morning.

“Now obviously you would know what happened being on the cast of Married at First Sight,” Jackie told Connie. “You’re not going to tell me but how controversial are we talking?”

It was immediately apparent that Connie found this to be a difficult topic to talk about.

“It’s a touchy one this one,” Connie eventually said with a big sigh.

“I just don’t feel comfortable really giving too much of my opinion on this matter because I guess it is big and it’s something Poppy and Luke need to deal with themselves,” Connie told us.

“Is it something that’s an inappropriate incident?” Jackie continued.

Meanwhile, Luke has spoken out to the Daily Telegraph about Poppy’s allegations, saying that he doesn’t wish to comment on the incident.

“I am not going to make any comments because, honestly, the best way to react is not to react,” Luke reportedly told the publication.

“To be honest, Poppy is a good person and best of luck to her. I am not going to comment on anything because it is not worth it, it really isn’t.

“Honestly she just needs to move on like I have and that is it. We are finished on the show and that is as far as it goes.”

Channel Nine also released a statement to us on the matter saying that they had reached out to both Poppy and Luke regarding the matter.

“We have seen Poppy’s post and note her distress,” the statement from Nine and Endemol Shine Australia reads.

“We have reached out to her to offer support and won’t be making any further public comment, and will focus on doing out best to support both Poppy and Luke.”

Hear more in the podcast below!

Dancing With The Stars 2020 Stars REVEALED!