What better way to end the week than with amazing Greek donuts that are FREE! The only catch, you can only get them for free for one hour!

Lukoumades are known for their incredible array of Greek donuts and they’re sharing the love this Friday. To celebrate the reopening of their Hyde Park store after giving it a refreshed look, they’re discounting their donuts by 100% from 8:00pm to 9:00pm.

Being beyond generous, they’re offering a wide range to choose from. You can go with their Original Greek Donuts with honey and cinnamon, Kinder Surprise which includes melted milk and white chocolate and Kinder pieces or the Nutella Dream with melted Nutella and crushed bickies.

They’re catered to everyone as there is also two of their vegan options with Dark Chocolate and Pistachio or the classic Maple Syrup. 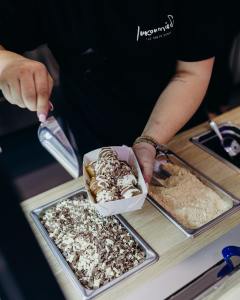 For those who roll in between 8:00pm and 9:00pm you will be treated to a generous portion of 8 delicious Greek donuts.

We can only imagine that the whole of Adelaide will be rushing out to get their hands on these goodies. With the family’s donut recipe handed down by owner Alex’s Yiayia, the donuts are a mix of traditional and modern with toppings and variations.

Head down to Lukoumades at 2/173 King William Rd, Hyde Park on Friday night to score yourself FREE donuts.

Time To Shake Those Hips! A Bottomless Tacos And Salsa Night Is Coming To Adelaide