With Easter just around the corner, this decision will, unfortunately, cause turmoil for many Easter plans.

Premier Steven Marshall announced the ban yesterday, with less than 5 hours notice, saying authorities were “not happy to do this” as it was “going to be a huge inconvenience to people, especially in the lead-up to this Easter period”.

“There is a concerning outbreak in Queensland. We don’t know the level of community movement from people who have been affected.

“But until we get a really complete picture, I think people need to expect there can be some further changes to the restrictions … if we do learn that we’re at a high risk.” 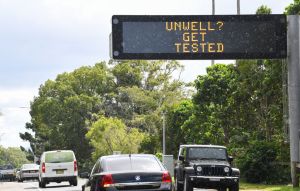 SA residents, essential workers, and people relocating can return to SA but must isolate for 14 days, getting tested on the first, fifth, and 13th day.

Anyone who was in Greater Brisbane from March 20 must isolate immediately and get tested. They are also banned from ‘high risk’ locations such as aged care facilities, jails, certain hospitals, and venues with 1,000 people capacity.

People who visited from March 11 should get tested if they develop symptoms.

The Adelaide Crows’ AFL match with the Gold Coast Suns is still scheduled to go ahead on Friday night at Adelaide Oval.

SA has two new cases today, both returned travellers. SA has 16 active cases and 652 in total.

Adelaide, We're Getting A Food Fringe!

A Dog Scentsory Garden Has Opened In Woodville West

The Rains Are Here - Flood Watch Issued For Parts Of SA