Motorists heading into the city this morning have been hit with big delays following a truck fire in the early hours of the morning.

The B-double caught fire on the down track of the South Eastern Freeway causing delays for city-bound motorists. 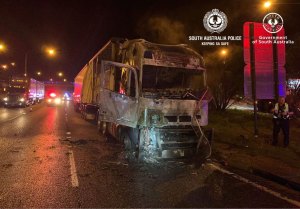 Police and emergency services were called to the freeway near the Mount Osmond exit after 3am this morning.

The left lanes were blocked with motorists restricted to one lane.

The 29-year-old driver of the truck was taken to hospital to be treated for smoke inhalation.

Victorian Stowaways Who Escaped Penalty Have Been Sent Back To Victoria