After Big Bird was stolen from the Sesame Street Circus on Monday, he has finally been returned safe and sound.

He was found back at the Sesame Street Circus at Bonython Park just before 5:00am this morning. 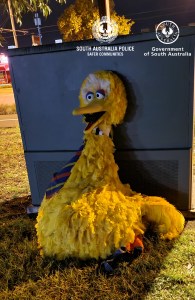 Peter Caldicott posted a photo on Twitter announcing that Big Big has been found and “a witness saw two people running away from the scene.”

Big Bird found, returned to the Circus, a witness saw two people running away from the scene ⁦@7NewsAdelaide⁩ pic.twitter.com/yFiyU6Vjl8

The costume was dumped by an electricity box with a not placed in his beak saying,

“We are so sorry!!! We had no idea what we were doing, or what our actions would cause.

We were just having a rough time and were trying to cheer ourselves up.

We had a great time with Mr Bird, he’s a great guy and no harm come to our friend. sorry to be such a big birden! 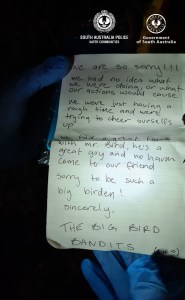 Apparently, his feathers were a little ruffled, but he is still in good shape after being missing for the 3-days.

Google To Set Up Shop At Adelaide's Lot Fourteen

You Can Hire An Alpaca To Walk You Down The Aisle