The AFL has announced they will be expanding the AFLW competition, calling for the remaining four clubs, including Port Adelaide, to join the AFLW league in 2022.

The AFLW has skyrocketed in popularity by 100%, with girls and women playing football grown to more than 600,000! The incredible participation and support of AFLW across Australia have prompted the AFL to invite the remaining 4 clubs, Essendon, Hawthorn, Port Adelaide and the Sydney Swans, to join the AFLW league. If all accepted, which could be as soon as 2022, we will finally see all AFL clubs in the AFLW league.

AFL CEO Gillion McLauchlan said during the announcement “We don’t feel that the competition is whole without all 18 clubs and we know from the clubs that they don’t feel whole now without an AFLW team.”

The inclusion of Port Adelaide in the AFLW league will be a momentous moment with South Australia having the greatest percentage of growth in female football in the country. As of April 2021, South Australia’s participation has grown 20% overall (junior, youth and senior).

Port Adelaide chief executive Matthew Richardson expressed his excitement for the addition of Port Adelaide in the AFLW saying, “This growing talent pool in South Australia means a second AFLW team is critical in order to provide a pathway for young girls to pursue their dream of playing football at the highest level.” 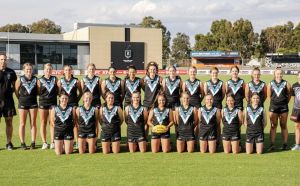 “We have a clear vision and plans to provide elite training and playing facilities at Alberton Oval to provide our team with the best opportunity to be successful, whilst ensuring that Alberton also is one of the premier AFLW venues in the competition immediately.”

“As a club we are well-prepared to enter the AFLW competition in Season Seven and welcome this opportunity to provide a formal submission to the AFL.”

Erin Phillips discussed the announcement this morning on Mix 102.3 saying, “it’s a step to becoming fully professional”, “I’m so proud! Fantastic for women’s sport across the board.”

Take a listen to Erin’s thoughts on the AFLW expansion below.

Shop Til You Drop: SA Public To Vote On Extending Shop Trading Hours

Could Adelaide Be The Next Hollywood? SA Film Preparing For More International Productions