Blondes really do have more fun as more than 300 glamourous impersonators have gathered at Brighton Beach to create a spectacle for Cancer fundraising in its eighth consecutive year.

The Marilyn Jetty Swim showcases the beauty icon who was represented by both men and women, dressed to the nines with blonde curly wigs, red lipstick, white-framed sunglasses, and white swimsuits.

The glamourous group paraded down Jetty Road at Brighton before plunging into the water at Brighton Beach. 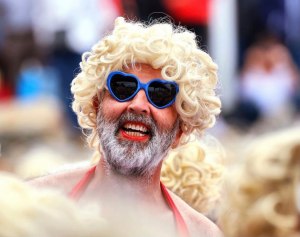 Starting in 2014, the Marilyn Jetty Swim continues to grow and become more popular as this year the fundraiser saw its biggest turnout yet.

Event founder Sarah Tinney said more than $145,000 had been raised in the past 12 months.

The unseasonably cold weather and social distancing rules did not dampen spirits as Marilyn-goers paddled around without a care.

“It was a little bit cold at first but it was OK, you warmed up,” one Marilyn said.

“All the Marilyns have to keep their swim rings around their waist at all times to help with the social distancing, so even when we’re marching we can’t really bump into each other because we’re going to have the inflatable devices around us.”

Get Your Umbrella's Ready, Adelaide's Set For A Soaking