Port Adelaide released their 2021 Sir Doug Nicholls Round guernsey yesterday on social media, crediting a selected high school student on the design. It has since come to light that artist Elle Campbell created this design 98 weeks ago and claims her design was stolen.

Port Adelaide posted a video with the selected student explaining the inspiration of her design, saying it took her months to create and was inspired by a design she saw on Instagram. It seems the person’s Instagram was Elle Campbell, as the artwork seems identical.

The evidence seems damning, with original artist Elle Campbell heading to social media to voice her disappointment in someone stealing her design. Elle put up Instagram Stories, saying “Wow. Thi is MY painting, someone has submitted it as their own and PAFC are using it for their guernsey.” 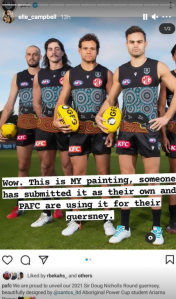 Her next story is an image of the same design on merch, saying “Not just similarities, it’s my exact painting.”

She then posted a screenshot of when she originally posted her artwork to her Story 98 weeks ago. She says in the post “98 weeks ago on my story if anyones wondering. This was up at Flinders Medical Centre for an exhibition on the 28th May 2019.” 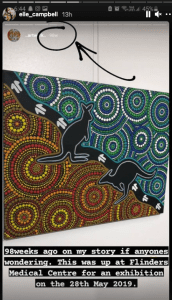 She posted another photo of her artwork, tagging Port Adelaide Football Club, saying, “I am deeply hurt by the use of this painting and the ‘artist’ claiming this work the be their own.”

“The meaning behind this painting was of my families ancestral burial ground at Kingston S.E. and the connection we still have with the native flora and fauna on those lands. My mother has sent me a photo of some Kangaroos coming out from the scrub to go have a dip in the water which was the inspiration for this painting.”

The response on Port Adelaide’s Instagram has been extremely negative with people commenting “She isn’t even the one who painted it” and “This is not her artwork! The original artist should be given credit for this design! So shameful.”

Elle also commented saying “This is actually my painting, she has stolen my artwork.”

Port Adelaide is currently investigating the allegations and has made no further comments.

They're Coming Home: Up To 150 Stranded Travellers In India To Be Flown To Adelaide