An emotional Cameron Smith has written his name into Australian sporting folklore with an epic comeback victory at the landmark 150th British Open at St Andrews.

With a remarkable five successive birdies to start the back nine, Smith chased down home hope Rory McIlroy to become the first Australian to claim the famous Claret Jug since Greg Norman at Royal St George’s in 1993.

“Ah, geez, what a week. I’m going to fall apart here, I know,” Smith said, choking back tears after being handed the coveted trophy.

“All the names on there, every player that’s been at the top of their game has won this championship.

“Yeah, it’s pretty cool to be on there. It really hasn’t sunk in yet. I don’t think it will for a few weeks. Yeah, it’s just unreal.”

Showing nerves of steel, the 28-year-old closed with a record eight-under-par 64 on Sunday to capture his elusive maiden major championship after two near misses at the Masters.

He won by a shot from American Cameron Young, who eagled the last for a 65 to force Smith to hole a clutch two-foot birdie putt to deny the American a four-hole playoff.

McIlroy finished a further stroke back at 18 under following a final-round 70.

“But, look, I got beaten by a better player this week – 20 under par for four rounds of golf around here is really, really impressive playing, especially to go out and shoot 64 today to get it done.”

“I want to thank my team back there for all their hard work. All the hard work we’ve done the last couple of years has really started to pay off and this one definitely makes it worth it,” Smith said.

“To the fans, I had a lot of support out there – especially the Aussie guys. It seemed like there were a lot out there.

“You guys really kept me going out there. You kept me plugging away – this one’s for Oz!”

His magical triumph came after the Queenslander started the final round four strokes behind Northern Ireland’s McIlroy and Norway’s Viktor Hovland. 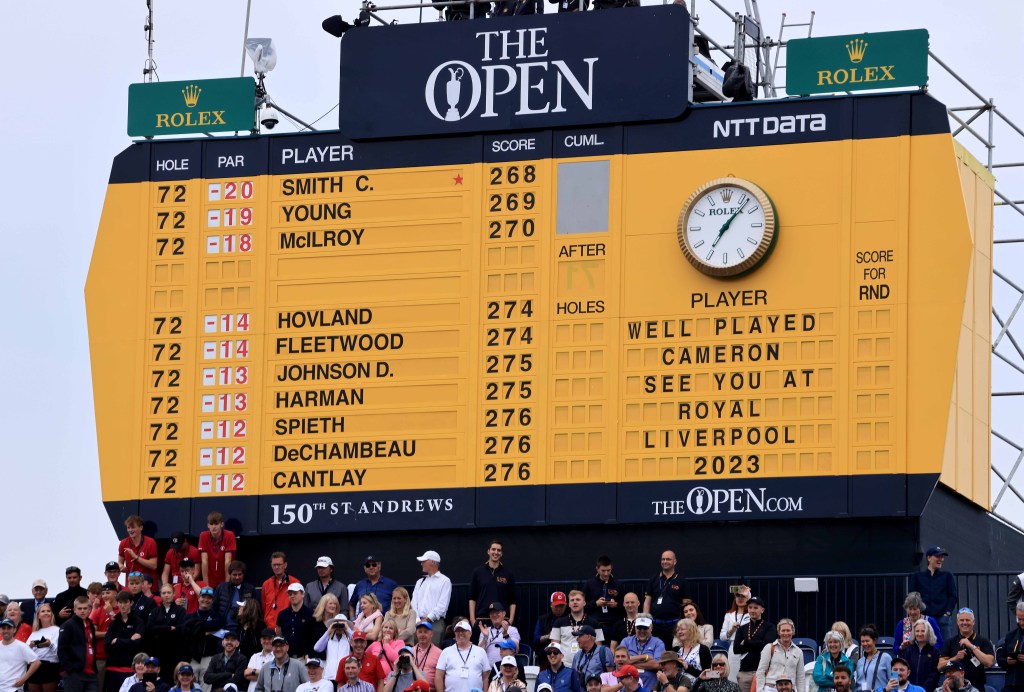 In etching his name in the history books after winning golf’s oldest and greatest championship, Smith also becomes the first player to complete The Players-British Open double since the legendary Jack Nicklaus in 1978.

Nagle and Thomson are the only other Australians to have won the Open on the Old Course at the home of golf.

But not even those two greats completed victory in such grand style.

Smith’s finishing 64 is the equal-lowest-ever final round from an Open champion and matched Norman’s 64 on the par-71 layout at Sandwich in 1993.

After a luckless third round with the putter, when he surrendered a two-shot halfway lead, Smith promised a Sunday birdie blitz in a desperate bid to reel in McIlroy and Hovland.

He dragged the overnight deficit from four shots back to just one after steadily reaching the turn in two under for his round, then jagged three birdies in a row to open the front nine.

But, so stealthy was his back-nine attack, that it wasn’t until Smith drained his fourth straight birdie on No.13 to snatch a share of the lead that McIlroy probably even realised he was being hunted down.

If there was any doubt, though, McIlroy would have known after Smith waved his magic wand once again to two-putt for a 25-metre birdie from off the green on the par-five 14th to seize the outright lead.

While McIlroy, like Smith on Saturday, couldn’t buy a putt, the Australian produced a brilliant scrambling par save on the treacherous 17th Road Hole to remain in control.

Not even Young’s sublime eagle at the last could then deny Smith, who calmly holed out under unbearable tension to break Australia’s 29-year Open title drought.